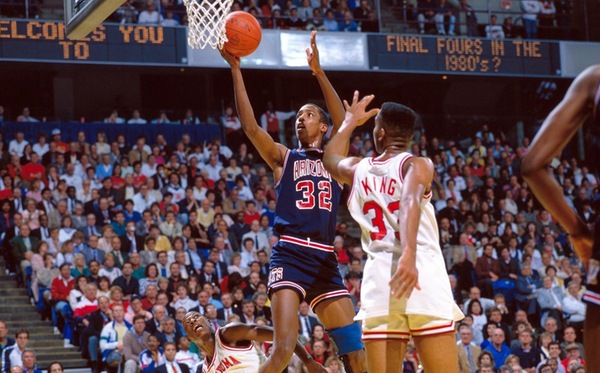 One of the most prolific scorers in college basketball history, Houston’s Otis Birdsong tallied 2,832 points from 1973-77 – a total that still ranks 15th in Division I history. Birdsong is second in the Houston record books in scoring, third in steals and eighth in assists, and he became the first Cougar to reach the 1,000-point mark as a sophomore. After averaging 30.3 points per game and leading UH to the NIT title game as a senior, he was named the Southwest Conference Player of the Year and a consensus All-American. Birdsong was selected No. 2 overall in the 1977 NBA Draft by the Kansas City Kings, and went on to score more than 12,000 career points and make four NBA All-Star Teams as a professional.

Sean Elliott helped establish Arizona as a national power, leading the Wildcats to the program’s first Final Four in 1988. Elliott scored an Arizona-record 2,555 points from 1985-89, and is also first in school history in made free throws and third in three-point field goal percentage. His accolades included the 1986 Pac-10 Freshman of the Year, the 1988 and 1989 Pac-10 Player of the Year, consensus All-American in 1988 and 1989, and Wooden Award, NABC Player of the Year and AP Player of the Year honors in 1989. Elliott was drafted third overall by the San Antonio Spurs in 1989, was a two-time NBA All-Star and helped lead the Spurs to the 1999 NBA title.

One of the famed “Razorback Triplets,” Sidney Moncrief piled up 2,066 points for Arkansas from 1976-79, the second-most in program history. Moncrief received multiple All-America accolades in the 1977-78 season that saw the Razorbacks win the Southwest Conference title and reach the Final Four. He then earned consensus All-America honors and was the SWC Player of the Year as a senior in 1979. Moncrief played 10 of his 11 professional seasons with the Milwaukee Bucks, and was a five-time All-Star, a five-time All-NBA selection, a four-time NBA All-Defensive Team pick and a two-time NBA Defensive Player of the Year.

Sam Perkins achieved both team and individual success at North Carolina from 1980-84. He was the ACC Rookie of the Year in 1981, a two-time consensus All-American and a three-time All-ACC First Team pick, along with helping lead the Tar Heels to the 1982 national championship. He remains the third-highest scorer in UNC history with 2,145 points, while his 1,167 rebounds still rank second. Perkins was a co-captain on the 1984 gold-medal winning U.S. Olympic team and was named to the ACC’s 50th Anniversary Team in 2002. After being drafted No. 4 overall by the Dallas Mavericks in 1984, Perkins played 17 seasons in the NBA, scoring more than 15,000 points.

Dubbed “The Human Eraser,” the late Marvin Webster was one of the most dominant big men in college basketball history. From 1971-75, Webster tallied an NCAA-record 2,267 rebounds, and his 740 boards in 1974 and 650 in 1973 are the two highest single-season totals in Division II history. Webster was a three-time MEAC Player of the Year, and he holds Bears program records in rebounding, blocks, field goals made and free throws made. He averaged 21 points, 22.4 rebounds and eight blocked shots in 1973-74, leading Morgan State to the Division II national title. Webster was drafted in the first round of both the NBA and ABA Drafts in 1975 and played 10 professional seasons.

A prolific scorer for USC from 1969-72, Paul Westphal averaged 16.4 points over his career – the ninth-highest scoring average in program history. He was a two-time All-Pac-8 First Team selection and received numerous All-America accolades in 1971 and 1972. Westphal followed his collegiate career with a successful run in the NBA. After being drafted No. 10 overall in 1972 by the Boston Celtics, he went on to make five All-Star Teams and four All-NBA Teams, and was a member of the 1974 NBA champion Celtics squad. After finishing his playing career, Westphal held head coaching positions with Southwestern Baptist Bible, Grand Canyon and Pepperdine, along with the NBA’s Phoenix Suns, Seattle SuperSonics and Sacramento Kings.

John Kresse spent 23 years as the head coach at College of Charleston, winning 560 games to just 143 losses. His 79.7-percent career winning percentage is the fifth highest all-time among Division I coaches. Kresse built Charleston into an NAIA power in the 1980s, highlighted by a national championship in 1983. After the Cougars transitioned to NCAA Division I, Kresse’s Cougars reached four NCAA Tournaments and two NITs between 1994 and 1999. He won four conference Coach of the Year awards following the jump to NCAA Division I after earlier receiving five District Coach of the Year honors from the NAIA. In recognition of Kresse’s decorated career, the playing surface at Charleston’s TD Arena was named John Kresse Court.

Danny Miles served his entire 45-year head coaching career at Oregon Tech, leading the Owls to NAIA Division II national titles in 2004, 2008 and 2012. Miles won his 1,000th game in 2014 and finished his historic career with 1,040 victories – the fourth-highest total among all NCAA and NAIA head coaches. Miles’ teams won 30 or more games 10 times and claimed a total of 23 regular-season conference and conference tournament championships. His long list of career accolades includes NAIA Coach of the Year honors in 2004 and 2008, the NABC Coach of the Year in 2012, and the NABC Guardians of the Game Award for Advocacy in 2013.