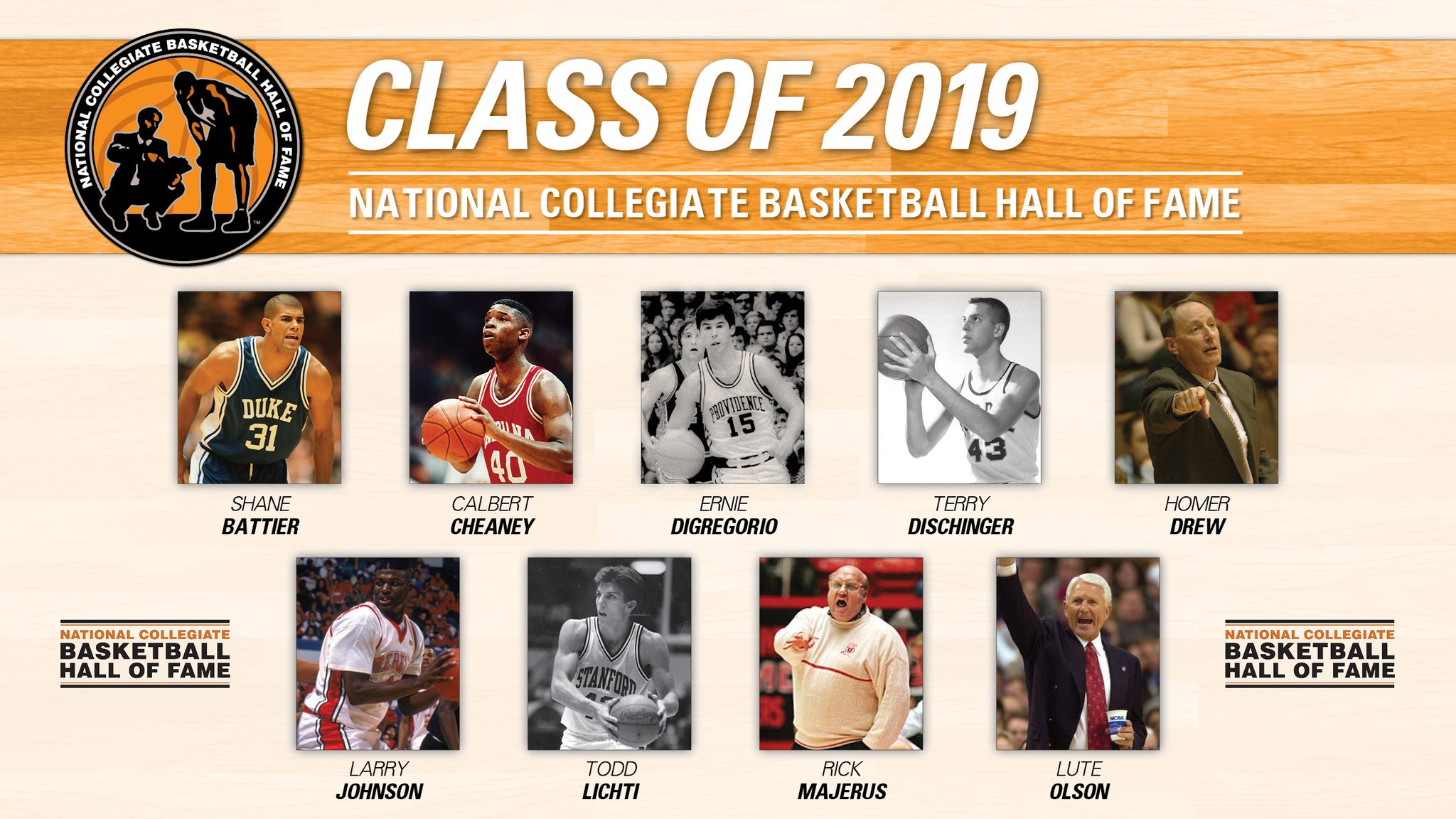 The National Collegiate Basketball Hall of Fame is located inside The College Basketball Experience (The CBE), a world-class experiential entertainment facility adjacent to Kansas City’s Sprint Center. The Hall of Fame’s 14th induction celebration will precede the 2019 Hall of Fame Classic powered by ShotTracker, which will showcase Missouri, Oklahoma, Butler and Stanford competing Nov. 25-26 at Sprint Center.

One of the most dominant players in the tradition-rich history of Indiana basketball, CALBERT CHEANEY ’s 2,613 career points from 1989-93 still stand as the most in IU and Big Ten history. The three-time All-American led the Hoosiers to 105 wins during his four seasons on campus, including four NCAA Tournament appearances, two Big Ten titles and a run to the 1992 Final Four. Cheaney averaged 22.4 points and 6.2 rebounds per game en route to earning Big Ten and National Player of the Year honors as a senior in 1993. He was selected No. 6 overall in the 1993 NBA Draft and went on to play 13 professional seasons.

An achiever of both team and individual success, Duke’s SHANE BATTIER averaged 13.6 points, 6.1 rebounds, 1.8 steals and 1.7 blocks per game from 1997-2001. He won his first of three-consecutive NABC Defensive Player of the Year honors and helped take the Blue Devils to the national title game as a sophomore in 1999, and then was an All-ACC First Team and All-America Second Team pick as a junior. Battier led Duke’s national championship run in 2001, earning Co-ACC Player of the Year, consensus National Player of the Year and Final Four Most Outstanding Player honors after averaging 19.9 points and 7.3 boards per game. Battier was picked sixth overall in the 2001 NBA Draft and later won a pair of NBA titles with the Miami Heat.

TERRY DISCHINGER was a scoring and rebounding machine in his three varsity seasons at Purdue. From 1959-62, Dischinger averaged 28.3 points per game – the third-highest average in program history – along with a school-record 13.7 rebounds per game. He also holds the Purdue record for free throws made with 713. Dischinger earned All-Big Ten accolades in each of his varsity seasons and was a second-team All-American as a sophomore and consensus first-team All-American as a junior and senior. Dischinger was a member of the 1960 gold medal USA Basketball team and went on to win the NBA Rookie of the Year award in 1963 and make three NBA All-Star Teams.

ERNIE DIGREGORIO was the floor general for Providence’s high-powered offenses from 1970-73. He averaged 20.5 points and a program-record 7.7 assists per game over his career, earning All-America accolades in each of his three varsity seasons. DiGregorio averaged 24.5 points per game as a senior, leading Providence to the Final Four and earning ECAC Player of the Year and NCAA East Regional Most Outstanding Player honors. He was the third overall pick in the 1973 NBA Draft and the NBA Rookie of the Year in 1974.

LARRY JOHNSON was an imposing force during UNLV’s dominant early-90s run. After starting his career at Odessa College – where he won NJCAA Player of the Year honors in both seasons – Johnson transferred to the Runnin’ Rebels in 1989 and averaged 21.6 points and 11.2 rebounds per game over the next two years. He was a two-time consensus first-team All-American, two-time Big West Player of the Year and the 1991 consensus National Player of the Year. Johnson’s UNLV team won the national title in 1990 and then went 35-1 en route to another Final Four appearance in 1991. He was the first pick in the 1991 NBA Draft, the NBA Rookie of the Year in 1992 and a two-time NBA All-Star.

TODD LICHTI was a potent scorer from the moment he stepped foot on the Stanford campus. Lichti scored 2,336 points from 1985-89 – the second-highest total all-time at the school – for an average of 18.8 points per game. He was an All-American in both 1988 and 1989 and is one of just four players to earn All-Pac-10 honors four times. Lichti scored in double figures in 121 of his 124 career games and led the Cardinal to the 1989 NCAA Tournament – the program’s first appearance since 1942. Lichti was the 15th-overall selection in the 1989 NBA Draft and played five NBA seasons.

HOMER DREW was a winner at every stop of his career, holding head coaching positions at Bethel (Ind.), IU-South Bend and Valparaiso. After tallying a combined 269 victories over 12 seasons at Bethel and South Bend, Drew took the reins at Valparaiso in 1988, ultimately spending 22 years with the Crusaders. Drew’s Valpo teams reached seven NCAA Tournaments, including five-straight appearances from 1995-99. His 1998 squad reached the Sweet 16, thanks in large part to one of the most iconic moments in college basketball history when his son Bryce hit a buzzer-beater to upset Ole Miss in the first round. Drew finished with 371 wins at Valparaiso, earned four conference Coach of the Year accolades and captured a total of 16 conference regular-season and tournament championships.

The late RICK MAJERUS won a total of 517 games at Marquette, Ball State, Utah and Saint Louis, and remarkably had just one losing season in 25 years as a head coach. The Al McGuire disciple reached the postseason 17 times, including 12 NCAA Tournament appearances. He won 10 conference titles in 13 years at Utah and took the Utes to Sweet 16s in 1991 and 1996 and the Elite Eight in 1997. Majerus’ most memorable season came in 1998 when he led Utah to 30 wins and an appearance in the national championship game. He earned five WAC Coach of the Year awards and was named the National Coach of the Year by Basketball Times in 1991.

As the head coach at Long Beach State, Iowa and Arizona, LUTE OLSON won 781 games over his decorated career – a number that ranked 13th in Division I history entering the 2018-19 season. He reached five NCAA Tournaments at Iowa – including a run to the 1980 Final Four – before taking the Arizona job and subsequently building the Wildcats into a national power. After missing the postseason in his first year in Tucson, Olson led Arizona to the NCAA Tournament in each of his final 23 seasons with UA. The run included Final Four appearances in 1988, 1994 and 2001, and the school’s first national title in 1997. Olson earned a total of eight conference Coach of the Year honors and was the NABC Division I Coach of the Year in 1980.